I was born Canadian in the city of Rouen, in Normandy, France. I was able to get the French citizenship at 8 and the Taiwanese one at 13. I grew up with these three nationalities, three identities, and one foot in each culture as I was able to go visit my family every year for holidays in Canada and in Taiwan. I soaked up each culture very early, feeling different without really understanding why. Now that I’m 25 and after a hectic TCK (Third Culture Kid) path, I find it intriguing how the feeling of belonging to my passport country change and evolve with time. There is a constant evolution about the way I identify myself.

PART I – A childhood to experience the world

My father is Canadian and worked in France, where he brought my Taiwanese mother, two countries which are literally on the opposite side of the world and which have very little in common culturally speaking. Until I was 6, we lived in a tiny town by the sea and we moved to Czech Republic where my father got relocated for his work. There,  I did my primary school in the French School of Prague and experienced a truly different life than the countryside lifestyle we had before in a little town near Rouen, where friends had horses, where we played in the fields with the cows… In Prague,  friends at school were privileged children: children of ambassadors, of company’s leaders But as expatriates,  they would actually face the same cultural issues, and living it in Prague altogether made it unique. I remember the celebration of Saint-Nicolas at School instead of Christmas, the famous Opera of Prague where my mother would take us and the mystic atmosphere of the city known for its tales and legends.

Childhood was actually very fun. We were the European nieces going back every year to Canada. Cousins would make fun of our accent as we would try to imitate their French-Canadian accent. My father comes from Quebec, the French part of Canada. We would spend summers at my grandmother’s in her beautiful condominium by the lake, admiring the raccoons while having breakfast at 6 in the morning, looking at the black bears rummaging through our rubbish bins by the window or listening to wolves howling while grilling marshmallows on a bonfire. And not to mention the moments we spent catching frogs or fishing with my sister and my cousins, sometimes in winter with my father, in a hole dug in the ice.

Some summers, we would do one country after the other. After a few weeks in Canada, we would cross half of the planet to reach Taipei, the developed capital city of Taiwan. We would have soybean milk and sweet steamed buns for breakfast, eat my grandmother’s delicious ginger-soya-sauce fish with rice, and go pray to the Buddhist temple by the house. Although we had Asian physical features, we would still be seen as foreigners, with my sister’s thick chestnut brown hair and my double eyelids. Actually, neither in France, Canada or Taiwan would we be really seen as locals. Funnily, while traveling in central Asia later, people would directly talk to me in Uzbek or Hindi. As we were seen as the occidental nieces or granddaughters, the cultural distance was actually much bigger to build a strong relationship with our Taiwanese family.  As a matter of fact, my mother has started to talk to me in Mandarin only when I was 6, so my vocabulary and ability to communicate were very little. Although we approached each other with delicateness, we were the first grandchildren of the family and got very spoiled. Now that I write it, I feel grateful for having such a childhood. Life was so exciting and our parents opened so many doors to us very early so that we felt there were so many things to discover. The world was so big but seemed so accessible to us, like a big playground. 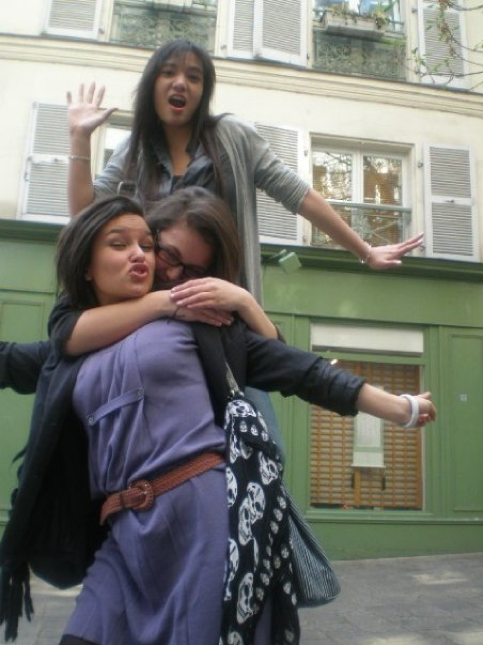 At 10, my father was sent back to France for work and my parents decided to buy a house in the countryside, north of Paris. There, I experienced integration difficulties that can encounter a Third Culture Kid. In the little town of Chambly, in Picardie, hosting around 10,000 inhabitants, it didn’t take long before we got noticed with my sister. We arrived with our Eurasian physical style, our international backgrounds and with other cultural manners. Typically, like this time we got naked in the public shower of the swimming pool. A Czech manner that shocked all the French women. The French culture is a very prudish on.

We grew up reserved and somehow I feel that we struggled to integrate because we didn’t understand how to create our own space among other kids. French culture is a beautiful one, with its real sense of criticism and analysis that shaped great philosophers and writers, but it can also be very pessimistic and judgmental. When you compare to Anglo-Saxon cultures, differences are just less well accepted. To be integrated into this new French culture, to make friends and to be accepted, I completely rejected my passport countries cultures. So, I hid the fact that my father was French-Canadian because of the strong French accent that French people could barely understand and sometimes would make fun about. And I avoided speaking in Mandarin with my mother in public as schoolmates would tease me by calling me “the spring roll”, the “lime-face” or “the ching-chong”. Later I would understand that my cultural mix is actually what makes me unique and today, I totally embrace it and I speak proudly about where I come from.

Part III: The recognition of my passport countries cultures

During my teenage years, my mother sent me for a few summers in “Language Study Program for Compatriot Youth” in Taipei¨ to learn Mandarin. It was a program set up by the government for overseas Taiwanese children. I spent incredible summers discovering my maternal culture with other teenagers that were just like me and I actually met my best friends there. I think this is only at this time that I started to have a real interest and identification to my Asian identity. At that time, China was becoming a superpower country and knowing that I could grow strong assets easily to build an international career just like my father, I integrated a Chinese language program in Wuhan, China – a one-year-exchange, part of my business studies. Where I thought I would find a part of me in China, I experienced a cultural shock. As they have a common history, Taiwan and China share similar traditions and cultures, but mentalities are very different. Also, Taiwan is an independent country but China does not really share the same opinion (Relationships between the two countries are getting tense, especially lately but that is another story that I’ll let you discover by yourself). When I would say that I’m half Taiwanese, Chinese people would automatically tell me that it makes me Chinese. And at this time specifically, I started to grow a need to affirm my Taiwanese identity. When I’ve never been patriotic, I started to defend the Taiwanese nation using the word “us”.  Still, during that year of exchange we had so much fun with all our international friends, discovering and experiencing the beauty of Chinese culture, traditions, food…  Feeling completely different somehow set me free, which would later enable a friend and I, to a certain conclusion: we feel best when we feel completely different and stranger. Where we would completely feel at ease and act naturally in some circumstances compared to some foreigners, we would also feel so different compared to locals. A feeling I experienced in France, Canada and Taiwan.

An aspect that may encounter any TCK (Third Culture Kid) is the famous question “Where do you come from?”-Saying “from nowhere and everywhere” may sound arrogant but it is actually a bit true. You don’t feel like you belong to any place and at the same time you’re comfortable anywhere you go. You just adapt and get used to it. I never really felt like I have a hometown or like I’m attached to the places I lived in Surprisingly, I experienced this feeling anytime I would go back to Taiwan and Canada. Probably because strong memories of my childhood are there. Recently, when my Canadian aunt announced that she would sell her house where we spend so many summers of our childhood, I saw a stable pillar of my life falling apart: I would never be able to go back to a place that actually felt like home. Though, this helped me realize that I could not imagine my life without a house by a lake in the Laurentides region of Canada. When I could hardly plan and see myself settling down until now, it might be the beginning of a Home recognition. 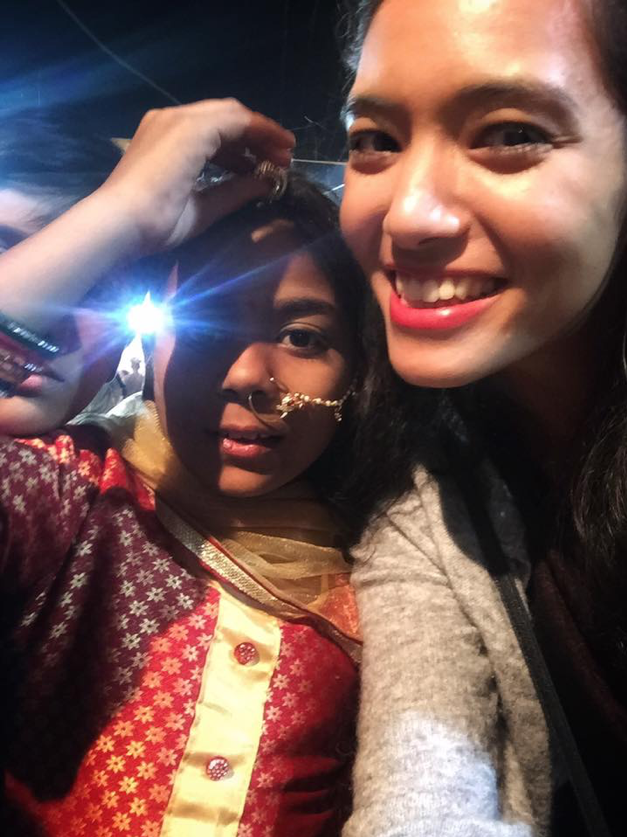 (Living in Mumbai, India since 8 months.)

Now that I became an adult, I feel I have overgrown France. Even if I do love France, I feel the need to reconnect with my roots, to understand better where I come from. Growing as a TCK (Third Culture Kid), the world seems so accessible that, as I said, moving isn’t really a big deal, it’s actually part of your comfort zone. Somehow, a strong desire to see the world has grown in me, and it’s getting a little stronger every day. Although I can hardly project myself settling down in a specific place at the moment, and despite not knowing what the next destination will be, I know that it’s going to be incredible! Obviously, there is still a long TCK (Third Culture Kids) path but the unknown is intriguing and exciting, and I can’t wait to explore it.

Cross Culture Therapy offers 1-on-1 online therapy sessions. Although our therapy services are specifically tailored to Third Culture Kids (people who have grown up in a culture different to their parent’s passport culture) and Cross Culture Kids, we welcome all people who seek our help. Our sessions are conducted via Skype for a duration of 50-minutes and can be purchased in packs of 1-session, 5-sessions or 10-sessions. If you are interested in purchasing a session, click on the Book A Session tab on our menu or click here.

Modularity and Parallel Processing in Psychotherapy

Learn why you feel like you are being torn apart by contrasting emotions.#Therapy #TuesdayTherapy #Feelings #Emotions pic.twitter.com/8kELMK1B1o

Submit your #TCK Story for a chance to win an Amazon Gift Card! Find out more: https://t.co/Slti2yrcvT